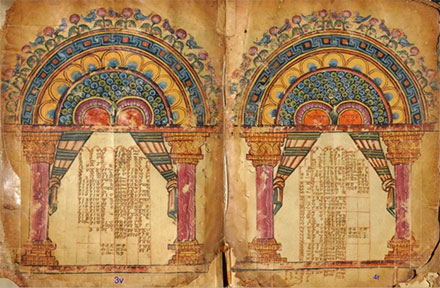 The tables themselves were usually placed at the start of a Gospel Book, and in illuminated copies were placed in round-headed arcade-like frames of which the general form remained remarkably consistent through to the Romanesque period. This form was derived from Late Antique book-painting frames like those in the Chronography of 354. In many examples, the tables are the only decoration in the whole book, perhaps other than some initials. In particular, canon tables, with Evangelist portraits, are very important for the study of the development of manuscript painting in the earliest part of the Early Medieval period, where very few manuscripts survive, and even the most decorated of those have fewer pages illuminated than was the case later.

Eusebian tables before the text of the Gospels in Codex Harleianus 5567 (Gregory-Aland 116; 12th century)

Attribution: This article incorporates some text from the public domain: Wikipedia, the free encyclopedia

SCROLL THROUGH DIFFERENT CATEGORIES BELOW

2 thoughts on “EUSEBIAN CANONS: the System of Dividing the Four Gospels”